We are 4 village churches situated just north of Uttoxeter and near to Alton Towers  in Staffordshire.  The churches at Rocester, Croxden and Hollington have shared a vicar (been in the same benefice) since 1994 and Denstone has recently moved from the Weaver Group to join the others in forming a new benefice under the care of The Rev'd Liz Jones who was appointed in June 2018.  She is also chaplain for JCB Academy, situated in Rocester.

Each of the churches has its own character, which you will see from their own pages on this website.  They each have a Facebook Page - so please follow us.

Hello from the Curate Garry Higgs

I started my Curacy within the Benefice in June 2020 as a 'Licenced Lay worker' this was due to the Coronavirus Pandemic otherwise I would have joined as an Ordained Deacon. I was eventually Ordained Deacon at the end of  September 2020 and have not looked back since.

With me are my two children (early teens) and my wife Carol, prior to coming here we lived in Tamworth Staffs. I had been at college studying part time whilst still holding down a secular job role within automotive part manufacturing. I have several classic cars which are mainly in pieces but intent to get them all on the road in the next two years (well I can dream) I also enjoy spending time with my family watching Cricket and watching the children play in the local club.

Curacy has not been what I had dreamed it to be mainly due to the Coronavirus but, I have met lots of you and I hope I will bet to meet everyone eventually. Please feel free to contact me if you need anything or if you just want a chat!

Please look here for more information about me

Hello from Liz and Terry Jones -

We thought you would like to know a little about us so have repeated what was printed in the parish magazine just before we moved. 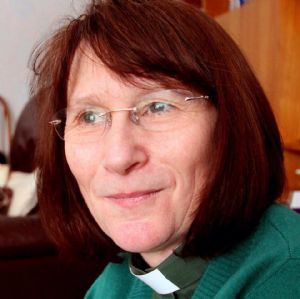 I lived in Burton upon Trent from the age of 7 having moved up from Surrey.  Apart from a brief interlude in London in my late teens I lived there until ordination when I was considerably older in 2002.  I have 2 daughters, now well into adulthood: Frances and Stephanie. When relaxing I like to walk with Terry, or alone in prayer, so a big bonus for us both is the beautiful Staffordshire countryside and nearby Peak District.  In recent years I have taken up painting, mainly with acrylics and I play the clarinet.  I also knit while watching the tele.

My working life has been varied, beginning as a secretary before moving into teaching (part time) office studies, shorthand and typing then word processing, database and spreadsheets.  I was licensed as a Reader in 1994 and when I reached the grand age of 40, life did indeed have a new start.  I decided to leave teaching and become a full time student at Derby University, leaving with a degree was in Psychology with Religious studies and going straight on to train for ordination at St John’s in Nottingham.  I served as a curate in Leek, then moved to Harlescott in Shrewsbury where I was half time minister at Emmanuel Church and half time mental health chaplain at Shelton Hospital working mainly with the elderly and adults with a learning disability.  I moved to Darlaston as Vicar of St Lawrence’s in 2011.  We became a single benefice with 2 neighbouring parishes and I was appointed Team Rector in 2014.   I have maintained an interest in mental health concerns and recently expanded that by studying the way that being creative with art and poetry can help with healing depression whilst reflecting on my life story.

I came to adult faith as a young mum.  I had been sent to Sunday School as a child but stopped attending church after being Confirmed at 13 and by the time I married at 20 I didn’t believe in God.    Nevertheless, I did have my children Christened because that’s what you do with a baby (any excuse for a party).  When Frances was invited to Sunday school at 5 and after a visit from the deaconess I eventually started to attend St Paul’s in Burton.  My childhood faith was re-awakened, grew and flourished as I gradually offered myself to Jesus.  Over the years I have known God to be One who heals, strengthens and enables, and I very much look forward to seeing what he has in store next.


Terry - I’m a Geordie, born in North Shields (although not sounding that way anymore!) and having my first years on the NE coast. I have also lived on the perimeter of the Lake District before moving to the Midlands when 9. I learned to love reading and classical music through my Mum and Birding through friends and especially through my English teacher at school who stood up for me when I was the ‘bad boy’ of the school!

I came to faith in 1969 through the ministry of the Vicar of the Church whose churchyard I passed through on my way home from school – a very saintly man called Dennis Beesley. He too fostered my love of reading by feeding me books from his shelves for nearly 2 years until I went away to College.  I did a degree in Medical Sciences at what was then Oxford Polytechnic then on to the main University as a graduate to do a PGCE as a member of New College, Oxford. The only thing that course did was to teach me that I didn’t want to teach - at least not in a school!

Most of my working life has been in medical research and the final 30 years in molecular genetics (gene cloning) and related work. My research has been funded by several bodies. Working funded by the MS (multiple sclerosis) society was very moving as we were encouraged to meet real sufferers and boy was that a stimulus to spend their money well!! The MS society also funded a PhD for me which after 4 years working at that level I never finished – but that’s another story…

Ministry has been a constant since my confirmation back in 1971 and I have always had a passion for service. My main focuses are on pastoral and teaching roles (yes, teaching!) and I have always been active in healing ministry. I became a Reader in 2001 and continued more or less in the same roles. I have recently been involved in some teaching in the Diocese mainly to do with healing ministry but some in other areas too.

I enjoy fell-walking, music (I am a member of the Lichfield Cathedral Chamber Choir), reading and birding (feathered sort!) and photography – mainly landscape and wildlife. I am also finding space to do some serious writing which I enjoy. The fruits of that I am sure you will see in due course.

One of the great highlights of course was meeting Liz and falling in love and then the big decision. Did I really want to become a clergy husband?! The decision was made in prayer in St. Chad’s chapel in Lichfield Cathedral and happily she said yes! Yay! We will be celebrating our 5 years (!) this May 4th (yes, Star Wars day!).

I am greatly looking forward to meeting so many new faces and getting ‘stuck in’ being part of God’s family is such a privilege and we have this great rehearsal of heaven to enjoy together with God’s help.

We are both on Facebook, and have already made friends with some of you. We look forward to making friends in person as well as in the virtual reality of the internet.  This move is an exciting new chapter of our lives and something we are doing together for the first time as Liz was already established in Darlaston when we met.   We know that God has many blessings in store – not just for us as a couple – but for all of us in the parishes we are coming to serve.